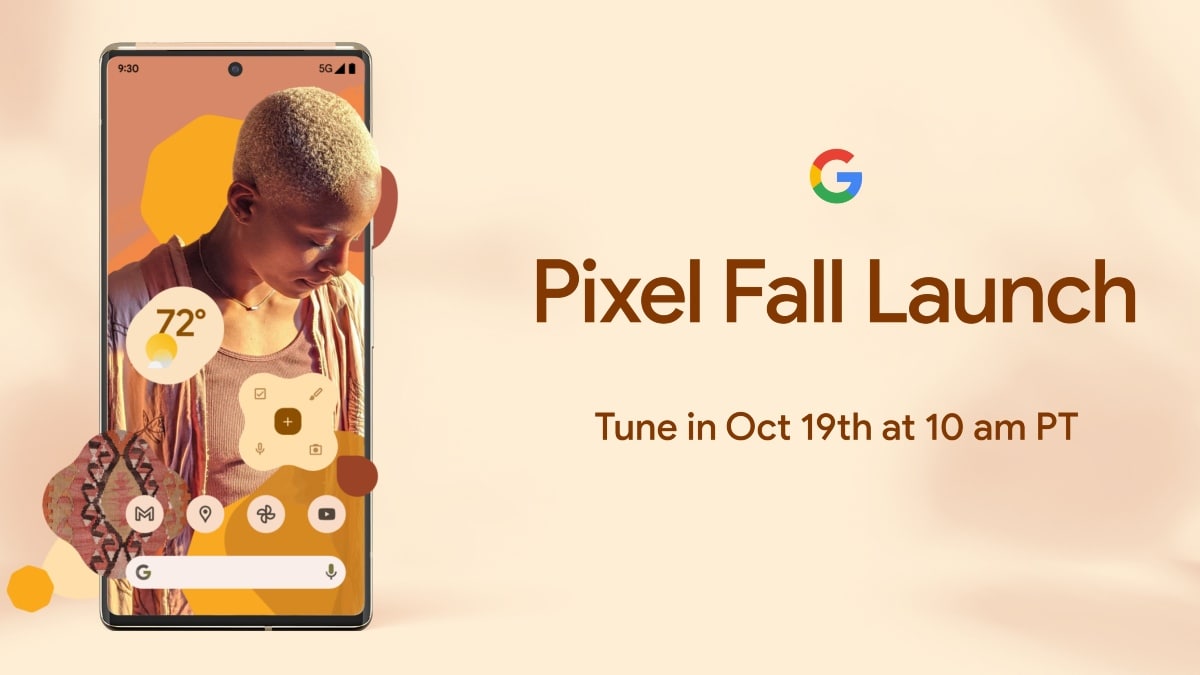 Google Pixel 6 launch date is set for October 19, Google announced through a tweet posted on Tuesday. The Android maker is hosting a virtual launch event where it will unveil the Pixel 6 as well as Pixel 6 Pro as its new flagship phones. Both new Pixel phones were announced with some details in August. However, we can expect Google to provide their specifications and other related information at the launch taking place later this month. Google may also unveil its anticipated Pixel Watch and give us a glimpse of its first foldable phone that is rumoured as the Pixel Fold at the Pixel 6 launch.

The launch event will take place at 10am PT (10:30pm IST) on October 19, the tweet posted by Google announced. A dedicated Pixel Fall Launch Event webpage has also been created that shows the front of the Pixel 6 series.

It is important to note that the Pixel 6 launch date has been announced just after the arrival of Android 12 that is yet to be rolled out to Pixel devices. The new Pixel phones will run on the latest Android version out-of-the-box.

As announced in August, both Google Pixel 6 and Pixel 6 Pro will be powered by the company’s in-house Tensor SoC and feature a dual-tone design. The Pixel 6 Pro will come with triple rear cameras, while the regular Pixel 6 will carry a dual rear camera setup. In terms of screen, the Pixel 6 is reported to have a 6.4-inch full-HD+ flat screen with a 90Hz refresh rate. The Pixel 6 Pro, on the other hand, is said to carry a 6.7-inch QHD+ display with a 120Hz refresh rate. Some previous reports also suggested that both new Google Pixel phones would come with 33W fast charging support.

Google Senior Vice President of Platforms and Ecosystems Hiroshi Lockheimer in August indicated that the Google Pixel 6 Pro would feature an in-display fingerprint sensor. It is, however, unclear whether the regular model will also have the same sensor or a traditional one.

Pricing of the Pixel 6 series is yet to be announced. But Google Senior Vice President of Devices and Services Rick Osterloh teased that part by saying that the Pixel 6 Pro will be expensive and the Pixel 6 will be positioned in the ‘upper segment’ of the market.

In addition to the Pixel 6 models, Google may use its launch event to showcase the much-awaited Pixel Watch smartwatch and Pixel Fold foldable phone. Both devices are likely to go on sale at a later stage, though.

Rumours in the past suggested that the Google Pixel Watch would come with a circular display. The Pixel Fold is speculated to have an LTPO OLED display. It is reportedly in development with the codename ‘Passport’ for some time.