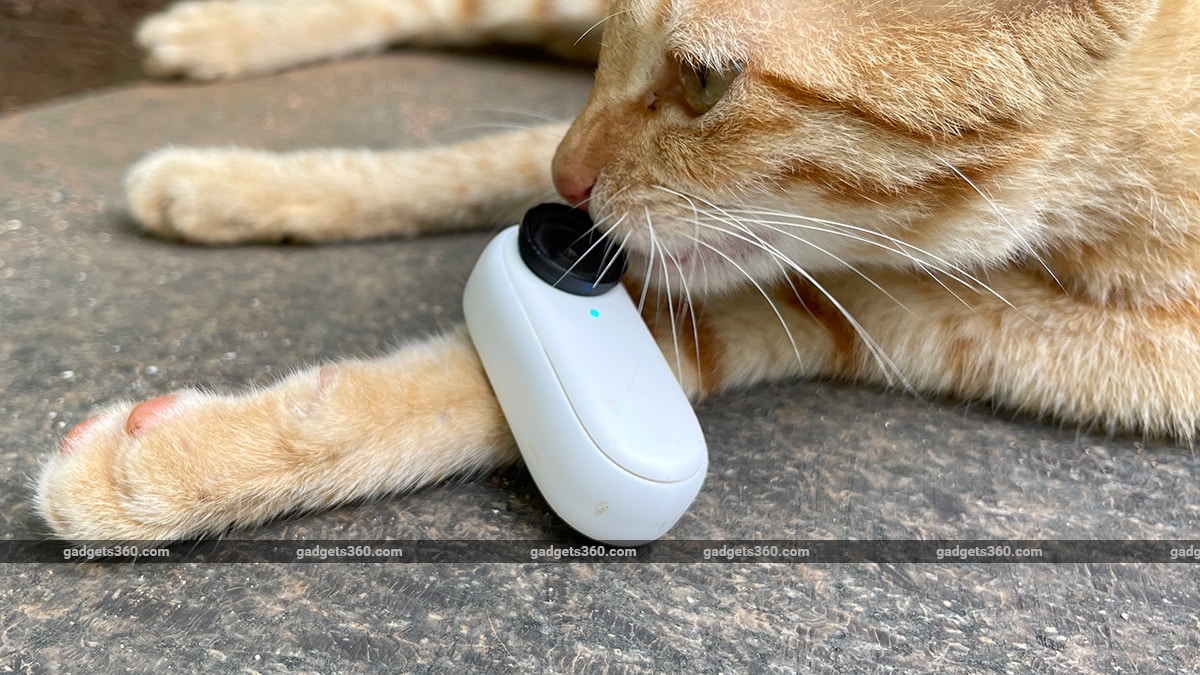 If you’re familiar with the action camera market, then you’ve most likely heard of Insta360, a popular maker of action and 360-degree cameras. Although not as well-known as GoPro in India, the company hopes to change this now that it has an official presence in the country. Today we’ll be testing the Insta360 Go 2, which is the second-generation model of the company’s smallest action camera.

The size reminds me a lot of the now-discontinued GoPro Hero Session series of tiny action cameras. However, the Go 2 has some unique abilities which makes it rather special. It claims to be the world’s smallest action camera, and it doesn’t come cheap. At Rs. 34,999 in India, it costs more than a GoPro Hero8 Black, and almost as much as a Hero9 Black. Is it a worthy alternative? Let’s find out.

The Insta360 Go 2 has a tiny, pill-shaped body about the size of an AA battery. It’s only available in white, which in my opinion, is not a great choice considering its intended use. It weighs just 26.5g and the plastic body feels sturdy. There’s a single LED indicator just below the lens, and there are contact pins at the back for charging, when you dock it in the case. The front panel, just below the LED, acts as a button for starting and stopping recording. I’m not a big fan of how this works, but we’ll get to that later. The lens cover is easily replaceable, in case your existing one gets scratched or cracked during usage.

The charging case for the Insta360 Go 2 is just as important as the camera itself. For starters, it’s the only way to charge the camera. The case resembles an AirPods Pro charging case and features a USB Type-C port, a standard tripod mount, and two collapsable feet that let you prop it up vertically for shooting. Inside, there’s a cavity in the top half for the camera while the bottom half has a backlit monochrome display and two recessed buttons.

The display lets you cycle between the various shooting modes, shows you the battery status of the case and the camera. The case even has Bluetooth so it can be used to remotely control the camera. The build quality of the case is very good, including the hinge, but once again I wish the colour had been anything but white.

You get a bunch of nifty accessories in the box. The magnetic pendant accessory is meant to be worn as, well, a pendant, and the camera can be mounted directly on it. There’s a clip mount that can be attached to a bandana or a cap, and a pivot stand that can be mounted on metal surfaces using magnets. Insta360 also sells a mount adapter bundle which includes a mount for GoPro accessories.

Unlike a GoPro, the Insta360 Go 2 comes bundled with some useful mounts in the box

The Insta360 Go 2 boasts of modest video recording capabilities. The 1/2.3-inch sensor can shoot at up to 1440p (2560×1440) at 50fps, which is not bad, but I would have liked the option of recording 4K video, especially considering that the GoPro Hero5 Session supported it back in 2016. The supported video modes are also basic. You get Standard, ProVideo, HDR, Timelapse, TimeShift, and Slow Motion. The same goes for photo modes, which include Standard, Interval, Starlapse, and Night Shot. Oddly, photos can either be saved as INSP or DNG, but not JPEG. You’ll need to export captured photos using the camera’s mobile or desktop apps for sharing.

The Insta360 Go 2 supports Bluetooth 5 and Wi-Fi. Unlike a GoPro camera, you get 32GB of built-in memory which is nice, but it isn’t a lot and there’s no microSD card slot so there’s no room for expansion. The Go 2 is also IPX8 waterproof for use up to 4m underwater. However, it’s only the camera that’s waterproof and not the case.

The Insta360 Go 2 has a feature called FlowState stabilisation (similar to GoPro’s HyperSmooth) which is available in ProVideo and Time Shift modes. You also have different field of view options such as Ultrawide, ActionView, Linear, and Narrow. These options can be manipulated even after the video is shot, via the app, which is something you can’t do with a GoPro.

The Insta360 app for iOS and Android lets you remotely control the camera, update its firmware, and offload videos and photos from it to your phone. It even lets you perform a fair bit of editing on videos and photos before you export them.

One of the main reasons to consider the Insta360 Go 2 over a GoPro is the versatility and flexibility it offers when it comes to mounting. The camera itself has a magnetic back so you can directly stick it onto any metal surface without worrying about mounts. Having said that, the magnets in the camera should have been stronger as it can easily fall off a surface if there’s strong vibration or any intense activity (which, for an action cam, should be expected). Still, the included accessories were more than sufficient for my use cases. The charging case can be used to remotely wake the camera and begin recording, which I found super handy at times when I didn’t have my phone with me.

The small size and magnetic back of the Insta360 Go 2 allows it to be placed anywhere, with ease

Video recorded in daylight was pretty good. I usually stuck to ProVideo mode since it offered the best stabilisation and features such as Horizon Levelling. The video quality was comparable to that of a GoPro Hero8 Black, however during intense activity such as running, Insta360’s FlowState stabilisation was unable to keep up with GoPro’s HyperSmooth stabilisation. Timelapse videos can be shot at 1440p too, and the quality was very nice. HDR videos didn’t seem to offer any perceptible advantage over standard videos, so I didn’t use this option too much. Slow Motion videos looked good too, but these are limited to 1080p at 120fps.

Still photos can look great depending on how you process them. The app offers two useful post-processing presets called PureShot and Color Plus. The former is handy if you want to instantly lift shadows for better visibility, but it also tends to blow out some of the highlights. Color Plus produces more dramatic-looking shots by bumping up the contrast and highlights. Videos and photos shot at night looked grainy and details were weak. I noticed that applying the Pure Shot filter on standard low-light photos produced a cleaner image than using Night Shot. When exporting video, there’s a ‘remove grain’ option, which helps clean up noise, but exporting takes longer.

The battery life of the Insta360 Go 2 leaves a lot to be desired. While the stats show an improvement over the first model, the Go 2 can still only record video for up to 30 minutes at 1440p in Standard mode before the battery gives out. In fact, in my experience it usually lasted less than 30 minutes since it stops recording the moment the battery level drops to 10 percent. You won’t even be able to shoot stills when the battery indicator is in the red, forcing you to recharge the camera. When shooting 1440p video in ProVideo mode, the clip length is limited to 10 minutes, and each one will knock a good 30 percent off the battery level. The case should be able to top up the camera twice over, provided you haven’t been using it as a remote control.

As much as I love the size of the Insta360 Go 2 and its versatility, there are a bunch of things I wish the company had done differently in order to make the experience better. Starting with the camera, it should have had a normal record button rather than a part of the entire frame acting as one, as it would have prevented the numerous accidental presses I had to deal with. Next is the LED indicator, which for some bizarre reason, glows white when the camera recording, which against a white body, can be hard to see during the day. It glows red when the battery is low, so why not use this universally accepted colour for recording?

The camera also gets very hot after a few minutes of shooting. This to some extent is normal for most action cameras, however with the Go 2, it led to the camera randomly crashing and corrupting the recorded file a few times in my experience. This makes it a bit unreliable if the weather isn’t very favourable. I also found the shooting modes a bit too basic for 2021 – even things like a burst mode for photos are missing.

The Insta360 Go 2 is incredibly fun to use, but it’s not without its share of issues

The charging case, as handy as it is, could use a few design tweaks too. It ideally should have had some degree of water and dust proofing too, as the lack of this currently limits where you can use it, like at the beach or in a pool. Due to the weak battery life of the camera, you’ll need the case around you wherever you go, so weatherproofing would have been nice. I wish the upper half of the case could swivel 180 degrees, which would have made it easier to shoot and keep an eye on the display at the same time. It’s also a bit finicky when it comes to charging – it did not charge when connected directly to a Macbook Air (M1) with a Type-C to Type-C cable, or when connected to any high-wattage USB Type-C PD charger. Insta360 recommends using a USB Type-A- to Type-C cable, like the one bundled, and a 10W power adapter to charge the case.

The concept of the Insta360 Go 2 has a lot of potential, but the execution needs a lot more polish. There’s definitely a place in the market for such miniature action cameras, and the potential for creativity with such a tool is virtually limitless. However, in order for such cameras to thrive in the market, especially like India, the pricing needs to be more appealing. Rs. 34,999 is simply too expensive for what the Insta360 Go 2 offers, and even though you can find it for a bit less online, it still costs more than a GoPro Hero8 Black.

Pricing aside, there’s a big list of changes I hope to see in the next version of this camera. I would like some sort of a display on the camera itself to show what mode I’m in, and a more functional shutter button and status indicator. Next, I’ll happily take removable storage over the built-in 32GB, if this would mean a lower price. Finally, I would like longer recording durations, a 4K option, better battery life, and a weatherproof case.

Overall, the Insta360 Go 2 is a fun little action camera that offers plenty of mounting flexibility, decent video performance, and useful accessories in the box. However, if your use cases won’t take advantage of its miniature size, then you’re better off buying a GoPro Hero8 Black for less, or even the Hero9 Black, as they are more feature-rich and reliable.