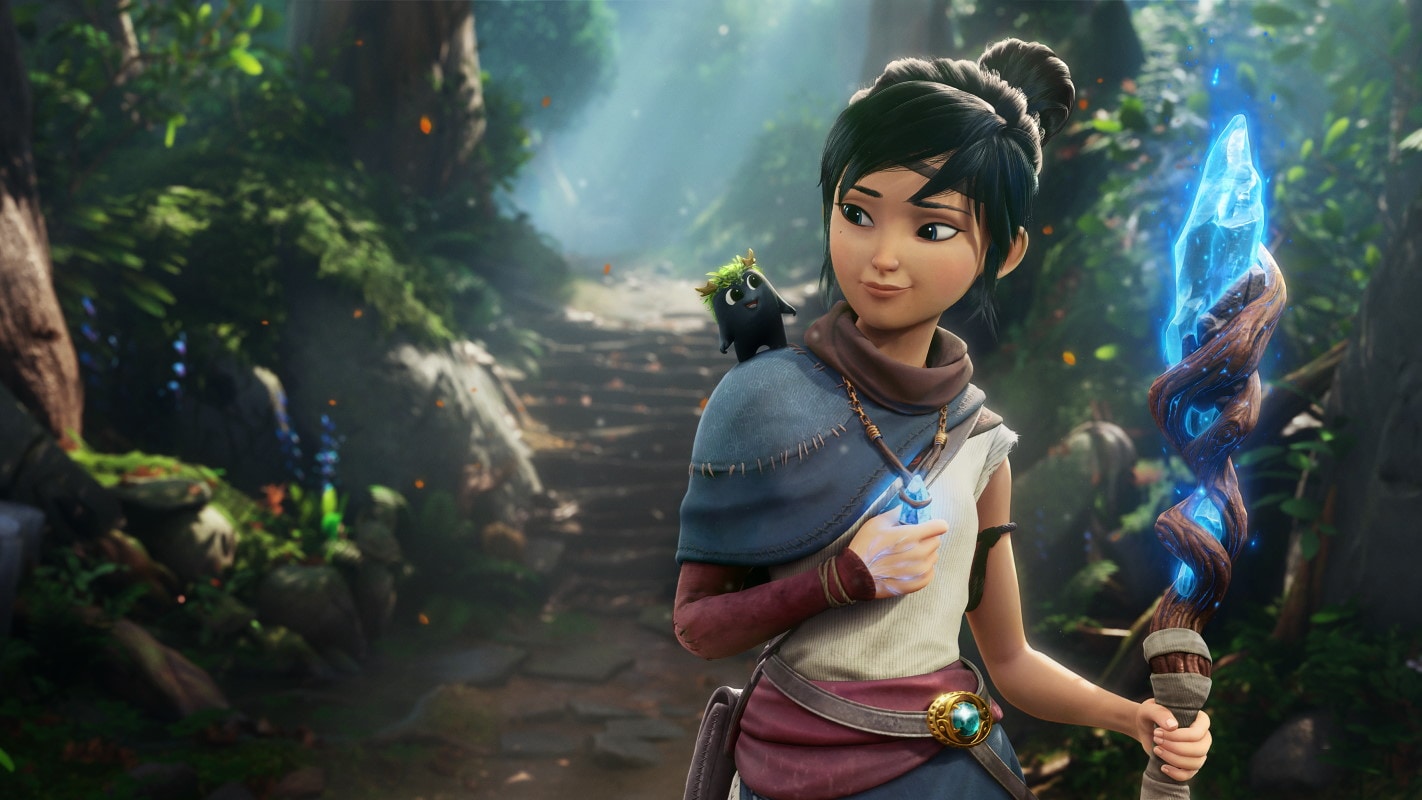 Kena: Bridge of Spirits — out now on PC, PS4, and PS5 — is the first game for California-based studio Ember Lab, which was previously in the business of making animated shorts and commercials. No wonder then that the most successful thing about Kena: Bridge of Spirits is its character designs and animations. The titular protagonist Kena (voiced by Dewa Ayu Dewi Larassanti) feels like a Studio Ghibli heroine designed by way of Disney, Pixar, and Laika. Kena is accompanied everywhere by tiny cute little creatures who can be best described as furry black-coloured Minions (though they aren’t bumbling fools). Some side characters are really adorable too. And all of them are at their best in Kena: Bridge of Spirits’ photo mode, where they pose, say cheese, and come alive.

This is all set in a world inspired by Asian cultures, primarily Japanese and Balinese. Inari fox statues dot the landscape, torii gates are pulled from Shinto, and the game’s lovely background gamelan orchestra score (more so when Kena is exploring) involves a collaboration with Baliense ensemble Gamelan Çudamani. But Kena: Bridge of Spirits never really justifies its setting, in why its story needs to borrow from — a cynic might say “appropriate”, instead of borrow — the cultures that it does. After all, Ember Lab is happy to stick with Western English accents everywhere, which doesn’t sit well with its love for all things visually Eastern.

Speaking of the story, Kena: Bridge of Spirits doesn’t ever really pull you in. That’s largely because its characters aren’t fleshed out, with Kena herself being short-changed, so you aren’t really motivated to do what the game wants you to. And though the game has some strong thematic building blocks — it’s about grief, healing, and moving on — Ember Labs is unable to come up with mechanics that might illustrate that through gameplay on Kena: Bridge of Spirits. For the most part, it’s a standard action platformer relying on the same tools that power Sony’s biggest franchises (from God of War to Horizon Zero Dawn) meshed with its obvious Zelda inspirations. All merged in one. The only good thing is that it’s not bloated, coming in at eight to nine hours.

From Kena: Bridge of Spirits to eFootball, Games to Play in September

Kena: Bridge of Spirits opens with a text crawl, telling us that it takes place in a world where people build wooden masks to honour those who’ve died and help guide their spirits to the next world. But some spirits get stuck at times, manifesting into tree-like contortions and corrupting the world. That’s where Kena comes in. Like her father, Kena is a spirit guide — she is bestowed with a magical staff passed down the family for generations. Kena heals the lost souls (read: bash them repeatedly on the head) and clears out corruption. She is a bridge for spirits, figuratively. But she’s not doing the job alone.

The aforementioned furry black Minions known as Rot follow Kena around, and they also help her in multiple ways. Rot can unlock new areas — either by carrying objects one place to another that in turn solve environmental puzzles, or by transforming into a large sealion-like creature for a limited time to clear away corruption. Rot can aid you in Kena: Bridge of Spirits’ combat too — by smashing into enemies, or distracting them that allow you to get in some licks. But Rot need “courage” to emerge in battle, which Kena must build by attacking and picking up golden spheres that enemies drop. (The only problem with Rot is that they are called Rot, which is objectively a terrible name. I suppose Ember Labs wanted them to be a personification of decay, but “rot” is not a good word.)

“Courage” has to be judiciously used in Kena: Bridge of Spirits though, as it has other attack and defensive purposes too in combat. You can use it to heal yourself with the help of healing areas activated by Rot inside every combat arena. “Courage” can also be called upon to have Rot destroy enemy spawn points. And lastly, it also powers Kena’s superpowered abilities — from a “Rot Infused Arrow” that deals mighty damage, to a powered “Rot Hammer” that does area-of-effect damage to all enemies around. Staying alive in Kena: Bridge of Spirits is about deciding the best use of the “courage” available to you. All the more important given Kena can’t take a lot of damage.

The special abilities — Rot Hammer, Rot Infused Arrow, slo-mo archery, shield boost, and sprint attacks — available in the skill tree all need that aforementioned “karma” currency which is earned by fighting enemies and restoring the corrupted environment around you.

This is all supplementary to Kena’s primary fighting skills that don’t need “karma” or “courage”. You’ve got a light attack, a heavy attack, shield, dodge, block, parry, and bow and arrow. You’ll need to use a mix of these, in combination with all the special skills, to get through the enemies that Kena: Bridge of Spirits throws at you. As the difficulty scales up with new enemy types, Kena: Bridge of Spirits pushes you to adapt as well. While I could get by with light attacks early on, against bigger enemies, I found myself using dodge more often, dispatching Rot to tie them up, and then shooting powerful arrows from a distance. But since Kena: Bridge of Spirits’ arenas tend to be on the small side, combat did end up being button mashing at times — which is not fun.

Outside of that, combat is interspersed with bits of platforming and traversal puzzling. This mostly involves looking for switches that Rot or your bow can hit, giant flowers that you can latch onto with your bow (just like a grappling hook), or climbing rocks and ledges that are marked conveniently with white paint (is it bird droppings?). If you’re stuck, you can wear those aforementioned wooden masks to see the world through the perspective of other spirits — it highlights objects of interest. But the solutions to certain Kena: Bridge of Spirits puzzles can be obtuse. I got stuck at one sub-level for half an hour once, only to stumble upon a solution that still doesn’t make any logical sense to me.

Though Kena: Bridge of Spirits encourages you to explore, this is not an open world. Just like the old Zelda-type games it’s inspired by, its world is split into zones that unlock one after the other. Each zone has the same ultimate goal: free a spirit. That usually involves acquiring a set amount of some item. Doing that in turn will require you to fulfil certain subtasks. It’s all very straightforward. As you make your way through each zone, you’ll come across infestations that block your way. You can clear those using Rot after you defeat the enemies that will inevitably spawn. There will be mini bosses along the way, and a major boss at the end. Game design 101 essentially.

You can also choose to sit down anywhere and play with the Rot. Kena will even do this on her own if you let her be for a while.

Look how adorable everyone is!
Photo Credit: Ember Labs

That said, the world of Kena: Bridge of Spirits is really gorgeous and colourful — even as the game is filled with decay, being stuck, and loneliness — from its dark lantern-lit caves to bright forest outdoors. And that’s from my vantage point on the base PlayStation 4, where smooth performance comes at the cost of graphical detail and visible aliasing (more so when Kena is running). It’s not as if the game is pushing for realism though, with its cartoony textures. And even though I didn’t experience Kena: Bridge of Spirits at its peak, this is how most console gamers will invariably play it, given Sony’s struggles with manufacturing enough PlayStation 5 units to go around. Not to say anything of the further supply issues in India. If you’re on PC, you get a much better deal thanks to Epic’s regional pricing efforts.

Ultimately, Kena: Bridge of Spirits is a by-the-numbers 3D action-adventure game. It might look like a modern Zelda game but doesn’t play like one. It’s largely just a series of arena-based combat routines, stitched together by long stretches of traversal, and cutscenes that are well-designed but feel like a forgotten Hollywood B-movie. Too often, Kena: Bridge of Spirits reminds you of better games you’ve played and that it’s borrowing from — which is not a good sign. There’s no harm in learning from others, it’s certainly well made, but it’s lacking in originality. There’s little personality to Kena: Bridge of Spirits, for it’s adopting the sheen of others. For a debut title, this is undoubtedly a good effort — but I fear Ember Labs have played it too safe.

Kena: Bridge of Spirits released September 21 on PC, PlayStation 4, and PlayStation 5. It costs Rs. 939 on Epic Games Store, and Rs. 3,330 on PlayStation Store.