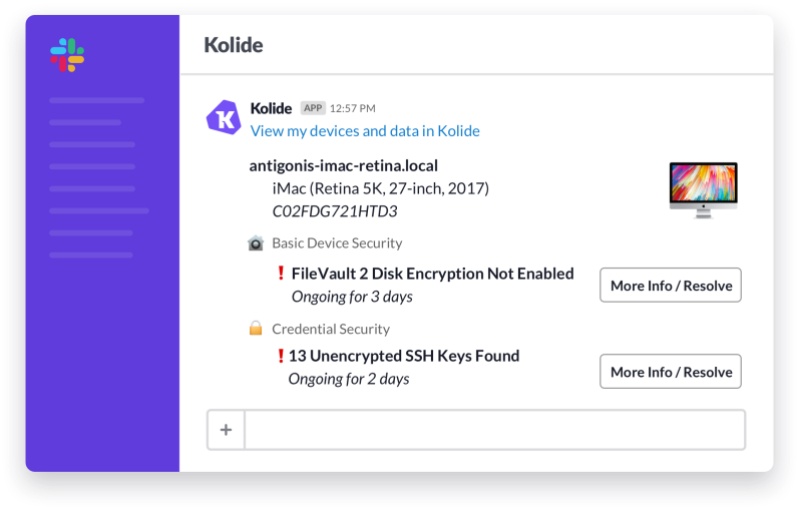 What’s next for open source in the decade of data

Open source is an engine for innovation, offering reliability, scalability and security for IT leaders intent on future-proofing their infrastructure. Learn how.

Endpoint security platform Kolide today announced that it closed a $17 million series B financing round led by OpenView Partners, with Matrix Partners participating. The capital brings the company’s total raised to $27 million to date, and CEO Jason Meller says it’ll be used to support Kolide’s go-to-market strategy and the hiring of additional engineers and developers.

The traditional IT practices of locking down and surveilling endpoints — e.g., work laptops and smartphones — might not be suited for today’s pandemic world. Remote migration and the intermingling of personal and work lives on company-owned computers have challenged the approaches and methods commonplace in IT device management. An alternative paradigm is emerging in what Meller calls “honest security,” which looks to accomplish an organization’s IT and security objectives by communicating and directly involving end-users.

“While most security practitioners are honest, the tools they are using may not be. If better tools were available which helped improve the relationship between the security team and the end-user, security teams would see their value immediately,” Meller, who previously served as CEO at Threat Stack and chief security strategist at FireEye-backed Mandiant, told VentureBeat via email. “Such values and benefits include a transparent collection of data, a more knowledgeable and security-versed workforce, and meeting your company and team’s internal security and compliance goals.”

Above: Kolide messages users about device status through Slack.

Kolide, which Miller cofounded in 2016 with Mike Arpaia and Zach Wasserman, embraces this philosophy with a product that offers alerts, remediation, and more delivered via Slack. Customers and their employees are provided features like issue context; self-remediation steps for Mac, Windows, and Linux devices; and a personalized privacy center, all built on the open source and Facebook-led universal endpoint agent project Osquery.

“[We] believe that the values an organization stands behind should be well-represented in their security program and that positive working relationships between end-users and the IT team are precious and worth fostering. However, because today’s industry is obsessed with creating tools focused only on extending visibility and increasing the IT team’s control over the employee’s digital assets, this critical relationship is irreparably destroyed,” Miller said. “Kolide builds user-focused endpoint solutions for teams that value productivity, transparency, and employee happiness via Slack. Why user-focused? Because end-users are capable of making rational and informed decisions about security risks when educated and honestly motivated.”

Miller makes the case that most modern workplaces have security plans and programs with little-to-no educational component or transparency. This leads to IT teams viewing employees as obstacles rather than allies, as well as to ignorance of — and even resistance to — basic security protocols. In a recent survey that Kolide conducted, the company found that 44% of organizations dissatisfied with traditional endpoint security showed a desire to adopt more honest approaches and that 71% believed they stand to benefit from these approaches.

“Kolide’s [honest security] values and benefits include a transparent collection of data, a more knowledgeable and security-versed workforce, and meeting your company and team’s internal security and compliance goals,” Miller said. “These benefits can only be realized when that relationship is reinforced with accountability, transparency, and ethics. In other words: honesty.”

Kolide, which has an 8-person team, has 250 customers (including 1Password) with a combined thousands of users and 23,000 devices under management. According to Miller, Glassdoor uses Kolide to assist users and orchestrate security compliance, allowing employees to know more about the state of their machines and help with their care and maintenance.

“In a world full of remote work and security concerns, Kolide is vowing to be the honest tool that professionals and IT teams need right now,” Miller added.

Kolide occupies the fast-growing global endpoint security market, which is projected to reach $23 billion in value by 2027. Competitors include Huntress, Automox, and Uptycs, the last of which recently nabbed $50 million in a series C funding round led by Norwest Venture Partners.