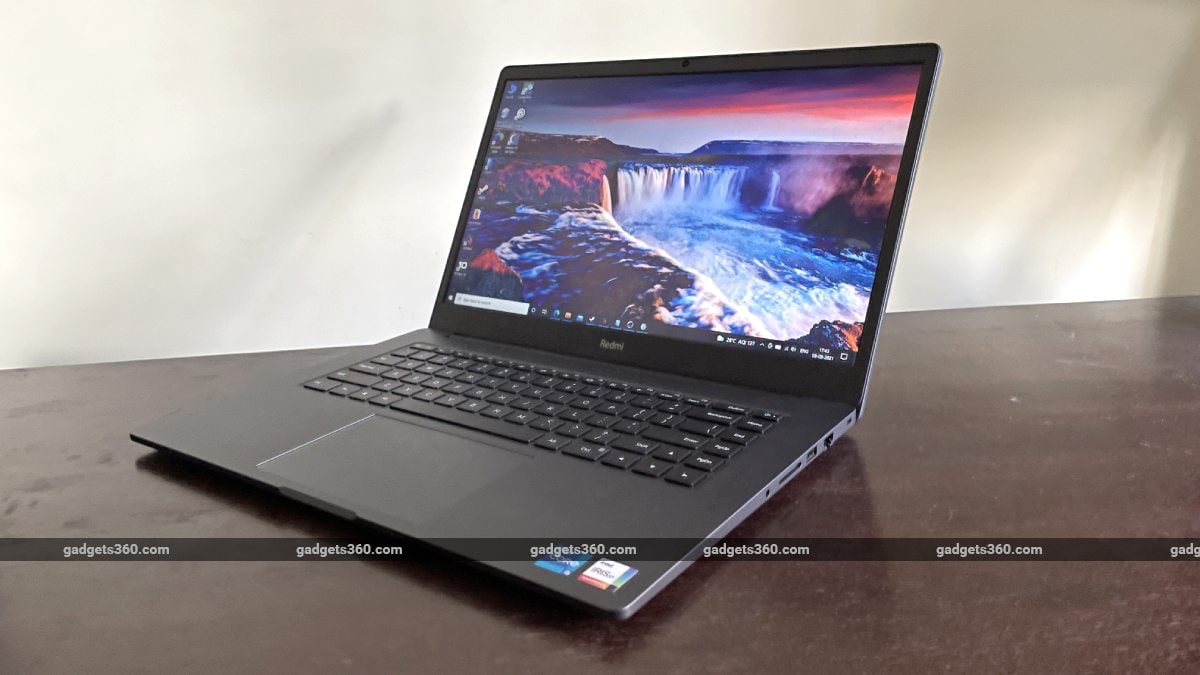 Xiaomi is pushing further into the Indian laptop market with a new set of mainstream RedmiBook and premium Mi Notebook offerings, all built around current-gen hardware and priced to take on mainstream PC brands. Today, we’re reviewing the RedmiBook 15 Pro which is aimed at those who want a comfortable machine for everyday communication, office tasks, or schoolwork. It isn’t the lightest or most portable, but it does offer several features that are aimed at making you feel more productive. We’re going to find out how different the new RedmiBook 15 Pro is from last year’s Mi Notebook models, and whether Xiaomi can now be recommended against competitors such as Dell, HP and Lenovo.

The RedmiBook 15 Pro is priced at Rs. 49,999 in India. It’s available in only one configuration, with a Core i5 CPU, 8GB of RAM and 512GB SSD. There are no variants or choices at the time of purchase other than extended warranty and insurance policies. There are bank and other payment service offers at the time of launch that will get you a small discount.

However, Xiaomi also offers a less expensive model called the RedmiBook 15 e-Learning Edition. This is pretty much the same device with only a few tradeoffs. You can step down to a lower-end Core i3 CPU with the same 512GB SSD, for Rs. 44,999. The other option also reduces the SSD capacity to 256GB, bringing the price down to Rs. 41,999. This could be an option for students or anyone else on a very tight budget.

Unlike the metal-bodied Mi Notebook series, the RedmiBook 15 Pro is made of polycarbonate, and definitely feels lower-end. The design is fairly plain overall. The dark grey lid has no pattern or texture. There’s an off-centre Redmi logo, and if you look closely, you’ll see a slogan in tiny lettering. This is unusual and I hope it doesn’t become a trend like it has on some phones, but at least it isn’t prominently visible here. The lid picks up a lot of smudges and handprints but these can be wiped off with a smooth cloth.

The Redmibook 15 Pro is 19.9mm thick and weighs 1.8kg. That’s well out of ultraportable territory but still not too bad for a 15-inch laptop. You won’t find it too uncomfortable to carry with you to work or class every day. The lid can be raised with one finger and the hinge feels firm.

With the lid open, you’ll see the large matte screen with relatively thick plastic borders, by today’s standards. Another Redmi logo is in the centre of the chin, and a webcam is at the top – which is good to see, considering that Xiaomi took a gamble that turned out poorly, when it removed webcams from last year’s Mi Notebooks.

On the lower half, the first thing you’ll notice is that the island-style keyboard does not have a number pad. Many 15-inch laptops do have space for these, and you might be looking for this if you work with spreadsheets or do a lot of data entry. On the bright side, there’s space for full-sized arrow keys and a column of dedicated paging keys on the right. The power button is in the top-right corner and is slightly stiffer than the other keys so it isn’t too easy to hit it accidentally. There’s no fingerprint sensor, and you don’t get keyboard backlighting either – these are features that people do look for when choosing a laptop outside of the basic budget segment.

We have an interesting array of ports on the two sides. Starting on the left, there’s the DC charger inlet, two USB 3.2 Gen1 ports, and an HDMI 1.4 video output. On the right, you’ll see a Kensington security slot, a collapsible Ethernet port, a USB 2.0 port, a full-sized SD card slot, and the 3.5mm combo audio socket. The big surprise, or even shock, is a complete lack of Type-C ports. Several affordable laptops now have at least one Type-C port and although very few devices use Type-C exclusively, it would have been helpful for people who use multiple devices and for future growth.

The Redmibook 15 Pro has stereo speakers on the bottom, reflecting sound off your tabletop. There are no vents on the side, but hot air is exhausted through the hinge. Construction quality overall seems decent – there is slight flex to the lid and the keyboard, but this laptop should survive the rigours of daily use.

The keyboard layout isn’t cramped, and typing is comfortable

Xiaomi has gone with Intel’s 11th Gen ‘Tiger Lake‘ CPUs but has made an interesting choice – the Core i5-11300H is not like most 45W H-series models, which are intended for mainstream productivity and gaming laptops – it is part of the H35 sub-series which is in fact a slightly souped-up U-series SKU with 35W of thermal headroom rather than 28W. This CPU is aimed primarily at slim gaming laptops, when paired with a discrete GPU, so it should still deliver quite well when it comes to everyday tasks.

There’s 8GB of DDR4-3200 RAM which is soldered and not upgradeable. The 512GB SSD is a standard NVMe M.2 module which can be replaced, though Xiaomi advises buyers to get this done through an authorised service centre if needed. The 46Wh battery is rated for 10 hours of battery life, and you get a 65W charger with this laptop.

Other than its full-HD 1920×1280 resolution, there’s nothing noteworthy about the screen – Xiaomi hasn’t publicised the panel type, colour gamut coverage, or any other characteristic. The rest of the specifications are pretty standard too – you get dual-band Wi-Fi 5, Bluetooth 5, a 720p webcam, stereo speakers with DTS audio enhancement, and a multi-touch trackpad.

Xiaomi does however include Microsoft Office 2019 Home & Student Edition, which is a nice touch. You’ll also be eligible to update to Windows 11 when it’s released. There is some preloaded software: Xiaomi Cloud for syncing data across devices, Mi Support for customer service, and the most interesting of them all, MIUI+.

This app, which is in beta, enables a number of features that iPhone and Mac users might be used to, while borrowing some ideas from Samsung’s Dex tool as well. You should be able to move files to and from a Xiaomi smartphone easily, and sync your clipboard to copy and paste text. Screenshots taken on your phone should show up on the RedmiBook 15 Pro, and so should notifications. You can also send Web pages from your phone’s browser to your laptop’s bigger screen, mirror apps, and edit files that are on the phone’s storage. Only a few Xiaomi laptops and phones that run MIUI 12.5 are supported at the moment though it seems the company could eventually offer this software across all Android phones and Windows PCs, plus maybe even Macs. Xiaomi makes no mention of these features on the RedmiBook 15 Pro’s product page on its website and I was unable to test any of this functionality since I didn’t have a supported phone handy.

Setting up Windows 10 after the first boot was smooth, as expected. The operating system feels snappy and responsive. There’s more than enough power on tap here to run everyday tasks, and you shouldn’t have trouble with dozens of browser tabs open, plus productivity and basic creative apps. The SSD on my unit was partitioned into a 146GB boot drive and a blank 330GB secondary drive, which seems unnecessary.

With that said, the RedmiBook 15 Pro’s screen is surprisingly mediocre. It can get bright enough for indoor use but it isn’t particularly good with colour reproduction or viewing angles, especially vertical tilt. Colours looked washed-out and desaturated. Games and videos didn’t look great, and you really wouldn’t want to do any colour-sensitive work such as photo editing on this screen. The speakers are also just about okay, with voices and sound effects in games coming through clearly, but very little detail or depth in music. This laptop is clearly better suited to productivity than entertainment.

Xiaomi boasts of the RedmiBook 15 Pro’s keyboard design and comfort, and to be fair, that is one of the biggest strengths of this laptop. They layout is easy to work with and key travel is satisfying. The keys do feel a bit plasticky and the left side does get warm, but these are minor issues. I think full-sized arrow keys and paging keys are more important than a cramped number pad, but I’m sure others will disagree. The lack of a backlight is unfortunate though. The trackpad is also plasticky but multi-touch gestures work fine. It’s centred to the chassis and not the keyboard so your wrists might rest on it while typing, but I didn’t have a problem with unintended inputs.

Of course we ran through several benchmark tests to check out the raw performance of the RedmiBook 15 Pro. PCMark put up scores of 4,547 in its standard run and 3,438 in its Extended run. The browser-based WebXprt and Basemark 3.0 tests managed scores of 231 and 189.35 respectively. Cinebench R20 showed scores of 537 and 1,790 in its single- and multi-core tests, while POVRay’s render benchmark ran in 3 minutes, 6 seconds.

The lack of USB Type-C ports is disappointing

3DMark’s Time Spy test returned 917 points, while the Fire Strike score was 1,762 and Night Raid managed 8,078. The Unigine Superposition test ran at an average of 8fps at its 1080p Medium preset, and showed a score of 1,069 points. Shadow of the Tomb Raider’s built-in benchmark averaged 15fps at Low quality at 1280×720, while Far Cry 5 managed only 19fps on average at the Normal preset at the same resolution.

The left side of the keyboard did get quite toasty when games or heavy tests were running, although the wrist rest area stayed cool. Fan noise was never an issue.

I managed to get through about eight hours of light use, which means you should be able to last a full work day without needing a recharge. It’s probably for the best that this laptop is only really suited to light workloads. The intensive Battery Eater Pro benchmark ran for 2 hours, 4 minutes before the laptop shut down automatically.

Xiaomi has gone decidedly low-end with the RedmiBook 15 Pro in nearly every department other than CPU power. What this means is you get a very capable workhorse for productivity, and if you want it primarily for office or school work, you’ll have little trouble. The large 15-inch screen and non-cramped keyboard layout also help make this laptop appealing for such use cases.

However, this CPU is still an odd choice for the segment and Xiaomi could easily have gone with the standard 28W ‘Tiger Lake’ U-series to hit a lower price point. With such average screen and speaker quality, no Type-C ports, and basic plastic construction, the RedmiBook 15 Pro is not going to be on many power users’ radars. That extra CPU thermal headroom isn’t being applied to things like games, as it was intended.

The top-end variant of last year’s Mi Notebook 14 was slightly less expensive, but it was a much slicker package overall. It was slightly slimmer and lighter, made of metal, and it even had a basic discrete GPU. Sadly, that model has been discontinued entirely. The RedmiBook 15 Pro is a completely different beast with different priorities, and this is what Xiaomi is now offering in the sub-Rs. 50,000 segment. The 2021 Mi Notebook Ultra costs Rs. 10,000 more and has the same CPU, RAM and SSD specifications at that price, but in a much nicer overall package that includes a high-resolution display, backlit keyboard, fingerprint sensor, and yes, Type-C ports.

Overall, the RedmiBook 15 Pro should find an audience for itself, but it isn’t a home run. I’d always suggest trying a laptop at a retail location rather than buying online based solely on specifications, which will help you see whether things like display quality and keyboard layout work for you or not.